Just three days ago I was presented to a social network totally dedicated to university students who are involved somehow with open source projects. This community is called Open Source University Meetup (OSUM). This is a SUN Microsystems initiative to stimulate the involvement of students on the open source world. This strategy might be efficient because, in parallel, SUN is also preparing the next generation of professionals to work with their set of open source products, increasing the work force available, and consequently the market for their solutions.

This community is also special for an additional reason. It was the stage of an important discovery: The power of engagement of a Java community, called CEJUG, around a common achievement. Let me tell you some details. Three days ago, Silveira Neto, a Sun Campus Ambassador, wrote a message to the CEJUG mailing list, saying that he had created a group in the OSUM social network dedicated to CEJUG members. He invited people to join and alerted that if the size of the group reached more than 100 people before the end of November, SUN would pay a pizza party to all the people in the group. Good motivation, isn’t it?

Before the end of November, just one day after the invitation, the number was reached :O. Actually, in the same day almost 60 people joined the group. On the next day, still in the afternoon, the group got 101 people, which enabled it to get the pizza party for free. At the moment, the group has 122 members and growing slower now. 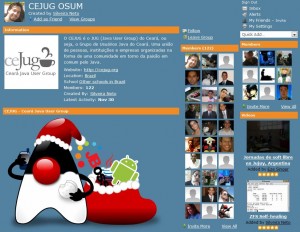 Definitively, the CEJUG community has an incredible power of engagement. Congratulations and Bon Appetit !