Brazilian people will spend 1 year celebrating the year of France in Brazil. The celebration will start today with a firework show (30 minutes :O) in the city of Rio de Janeiro. They will organize more then 400 shows through out the year with hundreds of French artists. I have no doubt that all Brazilian people will appreciate a lot the French culture. My last adviser, for instance, is a big fan of French literature, press, and architecture. He lived there fifteen years ago, doing his PhD. 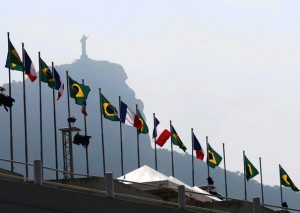 These celebrations will be occasions to approximate France and Brazil, two countries that share the same democratic and social values, with the same ambition to build a fair world, more open and worried about the respect to the cultural diversity.

This sentence was said by a politician, but this is so true. I like it!

By the way, this is not the first time that Brazil celebrates the culture of other countries. Last year (2008), they celebrated the centenary of the Japanese immigration. Look how funny it is! “celebrate immigration”. I would say that this sentence was never pronounced in USA and Europe in the last years. In general, immigrants are not well accepted here. Spain and Italy, for instance, are getting crazy about their immigrants. This is a shame because in Brazil we actually celebrate their presence there. It makes me proud!