Every working day, my wife and I go walking from home to the train station very early in the morning. Sometime ago, there was a singular thing on the way that caught our attention: a litle “burnt yellow” pumpkim was beautifully growing in the garden of a house in the neighborhood. Over the next 3 months we patiently followed the growth of that pumpkim, which was slowly becoming gorgeous.

Day after day, the temptation to take that away was inevitably increasing. However, the romantism of that rare scene of mutual trust between the residents and passersby was bucolically charming, surrounded by a scenario of a calm small town on the countryside of Belgium.

When the pumpkim was finally looking ripe, the residents put a lovely message for those of us who resisted to that daily temptation. 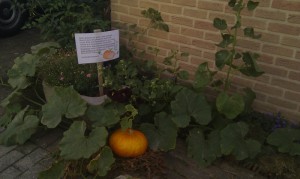 The message translated from French was:

“Our pumpkim is ready to be eaten…. Thanks to all people who gave a benevolent look and resisted the temptation to take it. So, come and enjoy a good pumpkim soup among neighbors this Friday, August 19th, from 7 p.m.! Everyone is welcome.”