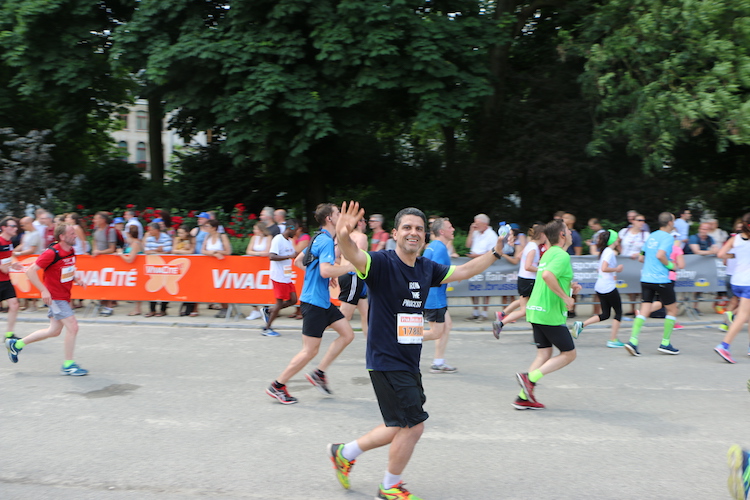 Today, I’ve run my longest distance yet: 2O kilometers in the 20km de Bruxelles! That’s almost a half-marathon (21.0975 km). This time, I did a lot better than my last race in LLN, when I was a bit dehydrated and exhausted because of the high elevations.

The first edition of 20 km de Bruxelles happened in 1980 with 4.659 runners. Today, the 39° edition was sold-out with 40.000 runners. Amazing! It is literally a big party. I’m glad to be part of it in my last year in Belgium and also sad because I didn’t participate before. I hope to visit Brussels in the future to do it again.

Some personal data of this race:

The path is flat with few elevations. 99% on paved streets and crossing the wonderful public park Bois de la Cambre. This time, I did check the elevations and saved energy for the hardest one at the end of the race. I run together with my friend and former boss Fabrice Degraux, who was familiar with the race and shared some tips about the path, including the painful last elevation.

This time I was very careful about the hydration. I drunk 4 glasses of water before leaving home and during the race, instead of throwing away bottles full of water after a few sips, I held the bottles until finishing them. It didn’t cause abdominal pain this time, so I will adopt the practice for the next race.

I remembered to put tapes on my nipples, but I forgot a small detail: since it was a warm day, the firefighters were throwing water on the runners to refresh them and I took a good deal of shower, leaving my feet soaked and suffering with some blisters. I have to avoid that next time or buy waterproof shoes or socks.

That’s my second race. As usual, it reinforced my inspirations in every aspect of life. I still don’t know when my next race will happen, but it will probably be in Canada. I expect to run a couple of half-marathons before going to a full marathon, which is planned for 2019 when I turn 40.

« Technical Documentation as Code The Microservices of My Life »