After one month working hard in a scientific project, I came back home with many subjects to discuss with you through this blog. I’m very happy with that experience because it was really unique in my life.

In a recent post I wrote about this project during the eNTERFACE ’08 workshop, where I spent the whole month of August with a multidisciplinary and multicultural team. Just to give you a fast overview, the project was about the fusion of 2 different modalities in order to help people on their every day life. The two modalities were speech and image, detected by a speech recognition tool and an image processing tool respectively. The fusion mechanism combines speech and movements to predict what people are planning to do in a certain scenario and the computer should help them to complete their tasks as fast as possible. For a scientific project and considering many challenges and limitations, actually it was a successful project. We are all happy with the results. 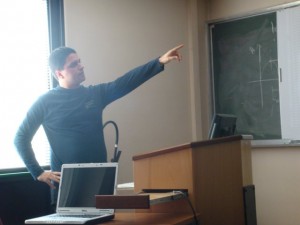 The most important thing is to finish the project looking as a family, but also keeping our friendship and scientific links always active.

« The eNTERFACE Workshop Javoxx is coming…. what? Devoxx? »