You know, I’m living in Belgium and Belgium is a very small country (We can put 100% of Belgium inside my state in Brazil 🙂 ), with 12 million people and considered in 2007 the world’s 15th largest trading nation. It’s amazing how a small piece of land can be so economically powerful.

Even being quite a young country (1830), Belgium has a rich culture and many specialties. Here is the land of the chocolate, french fries, crafts, comics, diamonds and, or course, BEERS! Yeah!! Belgium is the brain of the biggest beer distribution system in the world and leads the market in incomes, volume of production and number of brands. The distribution system is so fantastic that for the first time, pure Belgian beer arrived in the city where I was born: Juazeiro do Norte, a small city in the south of Ceará with 200 thousand people living there, including my parents. The screen shot below can prove what I’m saying. It shows my father holding a bottle of Stella Artois in a happy Sunday conversation by Skype. 🙂 He bought many bottles in a local supermarket to remember the greatest moments they had in Belgium last year. 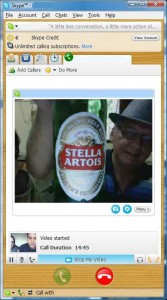 That’s the Beer Globalization and I’m happy that it is happening now because when I come back one day, I will have the opportunity to remember great moments I’m having in this small, but very special country.

In the map below you can see exactly where it’s possible to find Belgian beer in Brazil, which is exactly where Juazeiro do Norte is located 😉 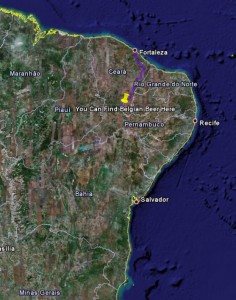 On the other hand, it isn’t possible to find our Cachaça, a Brazilian strong drink, in Belgium 🙁 . Fortunately , my supervisor went to Brazil some weeks ago and brought to me two special bottles of Ypioca, the best one produced in Brazil, original from Fortaleza. According to him, “It was cheaper than milk in Belgium”.