I was gradually moving from Windows to Linux in the last years and the definitive migration finally came in November, 2009. Today, all my work is done in the Ubuntu 9.10 operating system (a Linux distribution), running in a Sony Vaio Laptop, with 4GB RAM and dual core. In other words, the fastest machine I’ve ever had, not because of the hardware, but because this operating system doesn’t waste hardware resources as Windows does.

If you use Windows you certainly need an anti-virus. There is no way to use Windows without it, unless you don’t care about losing your work without any reasonable explanation. An anti-virus will demand around 15% of your computer resources. It means you will be 15% less productive while working. There is no need for an anti-virus on Linux. It is secure and simple. No program can do worse things without your clear permission and it has much less alert messages than Windows.

Before entering in this blog you had to turn on your computer and wait a considerable time until you’re able to start using it. Why did you have to wait for so long? Because some heavy applications decided, not always with your permission, to load part of them during the Windows initialization in order to look faster when you start using them. So, after a year using Windows, you certainly installed a lot of applications and your initialization process becomes slower and slower. That’s why your behavior has changed in the last years, by pressing the power button and walking around some time to have a coffee, talking to colleagues, making some table cleaning, and finally going back to work. This doesn’t happen in Linux, so the initialization is always fast.

71.70% of my Blog’s visitors use Windows (blue), 17.67% use Linux (green) and 10% use Mac (orange). Those who use Mac don’t have the same problems that Windows users have, because Mac, as Linux, is based on Unix. The difference between Linux and Mac is basically the usability. This is the quality factor that makes people spend twice more money on the same software architecture of Linux. 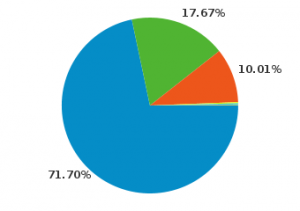 Yeah, the usability provided by Linux is not that great. However, it’s gradually changing thanks to Ubuntu, a Linux distribution focused on Linux accessibility, not only user friendly, but also social accessible by making it freely available for use and distribution. They don’t stop improving it. In some days Canonical, the company behind the Ubuntu Linux operating system, will release the version 10.04, which has an improved usability and it is going to definitively change the way how people face Linux for the first time (I recommend this interesting post at CNET about the Linux acceptance). I published a countdown banner on the right bar (you won’t probably see it anymore in a near future), which is making me much more anxious.