I recognize good developers by their capacity of cleaning existing code and adding a minimal amount of code for new features. Their pull requests are compact, favoring reusability and elegance. But even with their effort, some codebases are simply large because the implemented business is complex. This is the case of OSIS, an open source software designed to manage the core business of the Université catholique de Louvain.

OSIS is a monolithic Django project, composed of several applications. These applications can have their own resources or share resources with other applications. They can even be activated or deactivated at runtime, which means the entire codebase is not necessarily running in production. This architecture is so flexible that the IT department of the university decided to stimulate other departments, in need of a business application, to develop apps for OSIS, instead of other heterogenous choices. We kindly call them satellite apps in the OSIS constellation. The strategy seems to work because three apps were already developed in the last 18 months by three different teams.

However, those apps have tripled the OSIS’ codebase, making it larger than what was originally planned. It isn’t so serious in the case of a Python project because there are no such things as compilation, packaging or startup time. But a large codebase is harder to maintain and, when developed by multiple teams, may cause several workflow issues.

To address this problem, we picked one of the apps, externalized it in a different repository and added it back to OSIS as a Git submodule. Some of you may argue that Git subtree would be a better option compared to Git submodule because of its transparency to other developers, but it is so much more complex to configure, push and pull with the remote repository than to perform a single command like git submodule update whenever needed. Actually, we have been working with submodule for a while and we had no major issues so far.

Others may also argue that it’s time for micro services. Well, I don’t see it as an advantage just yet because we may reduce the codebase but we would, at the same time, complexify the architecture with an additional web service layer, additional security measures and more configurations. We don’t even have the excuse of a performance issue, so the added value is obviously not there yet. But when the time comes, what we are doing now will certainly simplify the transition to micro services.

Moving the Internship App to a New Repository

I’m currently working on the Internship app, one of those satellite apps, and here is a step by step guide to move the app to another repository and add it back as a submodule of OSIS. To avoid messing up with my programming environment, I’ve decided to do everything in a temporary folder:

Then I cloned the OSIS repository inside of the temporary folder:

To preserve the history of changes in the Internship app, I decided to start the new repository from a clone of OSIS:

In my case, the default branch of OSIS is dev. After cloning it, the branch of osis-internship is also dev, so I have to create a master branch from dev, but you don’t have to do that if you cloned the master branch of your repository:

This is an important step, so I commit these changes. In this project, we put the number of the issue we are working on in the commit message:

The last steps for the repository osis-internship is to create a new repository on GitHub, reset the remote origin to point to this new GitHub repository and push the local master branch:

The repository osis-internship contains now only the artifacts of the Internship app.

Creating the Submodule in the OSIS Repository

Moving back to osis, I removed the folder internship and commit the change:

Then I add the repository uclouvain/osis-internship as a submodule of osis:

Finally, I commit and push the change to GitHub:

Voilà! The new submodule was added to the codebase of OSIS, which is now smaller, since a submodule is just a reference to another repository. 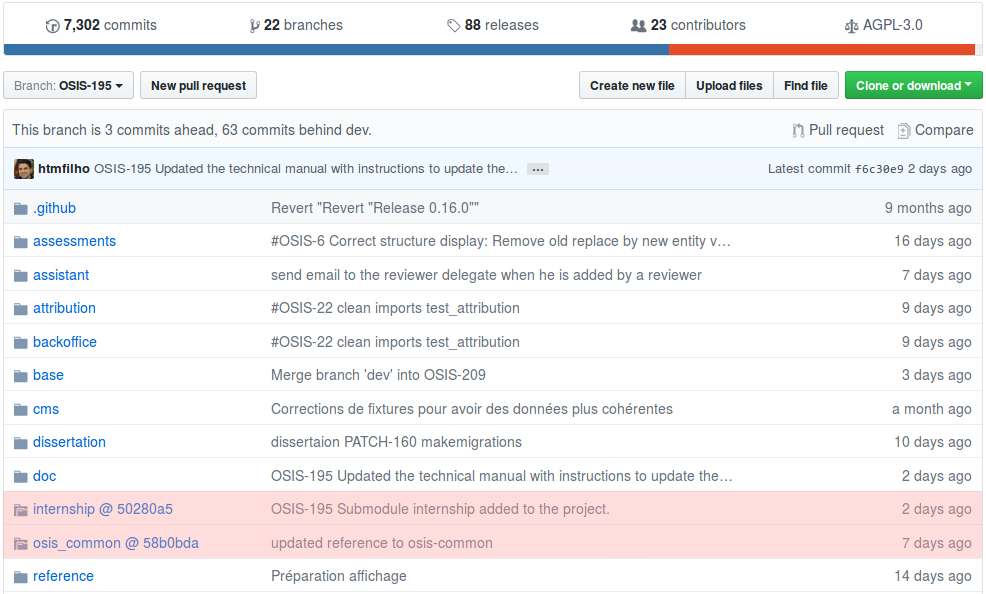 How to Develop in the New Submodule

At this point, the submodule is ready to be developed, but I did everything in a temporary folder. So, I have to get back to the working environment and pull the latest changes:

Then I setup the local submodule:

This setup is necessary every time the repository is cloned. After that, the only command I need to remember is:

which will be useful when somebody else updates the reference to the internship repository, thus the latest modifications are not in loco yet.

I would add, in conclusion, that another important motivation to move an application to another repository is to have an independent lifecycle from the rest of the system. This is particulary important in applications developed by different teams under distinct context and subordination. Imagine how difficult it is to coordinate all parties to have a synchronized release under short iteration cycles. Using submodules, the application can evolve according to the pace of its team and be released without interfearing on other projects’ deadlines.