I attended JavaPolis in December and I have to agree that it was one of the best conferences that I have ever seen. I met very important people there, including the big guy: James Gosling. Everybody was very kind and happy talking with a Brazilian guy: me. I’m not so young anymore, but my behaviour was close to a fun boy. 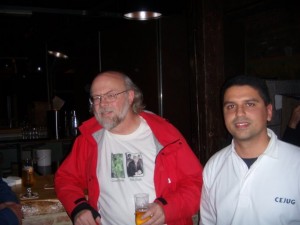 The funny thing is that I was almost the only Brazilian at JavaPolis. Fortunately, a woman from São Paulo called Yara Senger attended as well but as a speaker, which is very cool. Why people so passionate with Java technologies, like Brazilians, do not attend JavaPolis massively?

My first diagnoses is that Belgium is not a well known country for Brazilian people. So, there is not many news about Belgium in Brazil, what contributes to keep JavaPolis hidden as well. I received a free ticket because I’m a JUG Leader (CEJUG), so I’m feeling the obligation to contribute directly in the exposition of JavaPolis for Brazilians in 2008, starting inside my JUG. Actually, the exposition started to happen with Yara’s contribution to the Java Magazine, a Brazilian national magazine, with an article presenting the conference as a whole. The article mentioned me as a CEJUG Leader attendant. Very cool! Thanks Yara!

What I will do is to promote the creation of a Brazilian group to invade the JavaPolis’08. We are getting good results with a similar initiative to attend Jazoon’08. I think we will get even better results when I start to talk about the big variety of beers in Belgium (around 400). Probably, it will become the first priority instead of the conference.