The Ceará Java User Group has become even more active in 2008. In the last post you saw where my Java User Group is located in Brazil. Now, you will know that we organized in February 12 an event with more than 500 people, which represents the biggest Java event ever organized in Ceará.

We are proud with that special edition of the Café com Tapioca, our monthly event. We negotiated the participation of some SUN evangelists directly with SUN Microsystems during the last JavaPolis edition and they made three presentations. The first one was about the strategy of SUN Microsystems for Java developers, headed by Reggie Hutcherson, the manager of the evangelist group. Two other sessions were headed by Simon Ritter, who spoke about JavaFX and SunSpot, two of the main subjects promoted by SUN nowadays. We also had the participation of Paulo Silveira, a Brazilian consultant sponsored by Fortes Informática.

Reggie and Simon visited three of the main software companies in Fortaleza. They were Instituto Atlântico, Ivia and Fortes. It was important for CEJUG because it shows our compromise with those companies, which gave total support to CEJUG in 2007 and it was important for those companies as well because they could present the local expertise in software development using Java. It is a way to attract SUN’s eyes to the region. 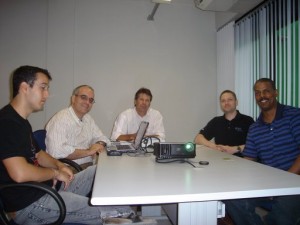 We hope to continuously create more and more sustainable initiatives to CEJUG. We have been doing a great job in our local community and our desire is to do even more. Follow this blog to see what we are constantly doing.