I went to my city last month, Fortaleza, Ceará, Northeast of Brazil, and I visited some software companies there, mainly to meet old friends and also to see how they are doing on this competitive market nowadays. Ivia was the one that impressed me a lot. They started with less than 10 people in the 90’s, and now they have more than 300 professionals, and they are looking for more to fulfill a growing and hard demand.

I visited other companies, but moments at Ivia were very nice because I started my professional life there and I was one of those ten professionals at the beginning. I explained what I’m doing in my research projects and they talked about their market today, which has a strong emphasis in outsourcing.

Outsourcing is considered a big strategy nowadays. It was the main reason of the Indian transformation, from a completely poor country to an emergent world power. It means that companies, mainly from the United States, decide to give part of their processes to be executed in India, by Indian companies.

Ivia does outsourcing internally and now for Europe and the United States as well. When doing services for foreign companies, Ivia calls it Offshore, or Offshore Outsourcing, which means processes of a company are executed by other companies in other countries. It is also a practice of Secrel International, a software industry located in Fortaleza, producing software for the United States and Europe too. Ivia and Secrel International are leading IT foreign relationships in Ceará. It is a direct impact of the CMMi certification achieved by both in the last years. CMMi is a kind of guarantee that IT services will be done in a high quality independent of the place in the world.

Nowadays, Ceará is not strong in Offshoring, another concept that means a company creates an infrastructure in a foreign country because of the availability of resources in a lower cost or in a higher quality. In IT, humans are the main resources, and the human resource in Ceará is more about high quality than low cost, but not in enough volume. Companies already installed in the state need, at least, 1000 professionals to fulfill the demand.

Great initiatives are helping to solve the problem in a long term. An undergraduate course was created just to prepare professionals on technologies demanded by local companies. In addition, three universities and many faculties are graduating hundreds of professionals every year. In parallel, CEJUG is doing a great job, reinforcing the knowledge of Java developers and promoting new technologies to increase the sort of current capabilities. However, it is not enough yet and a lot of work should be done. 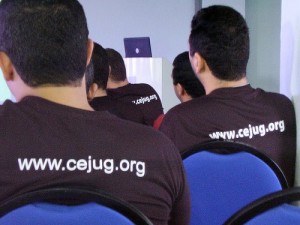